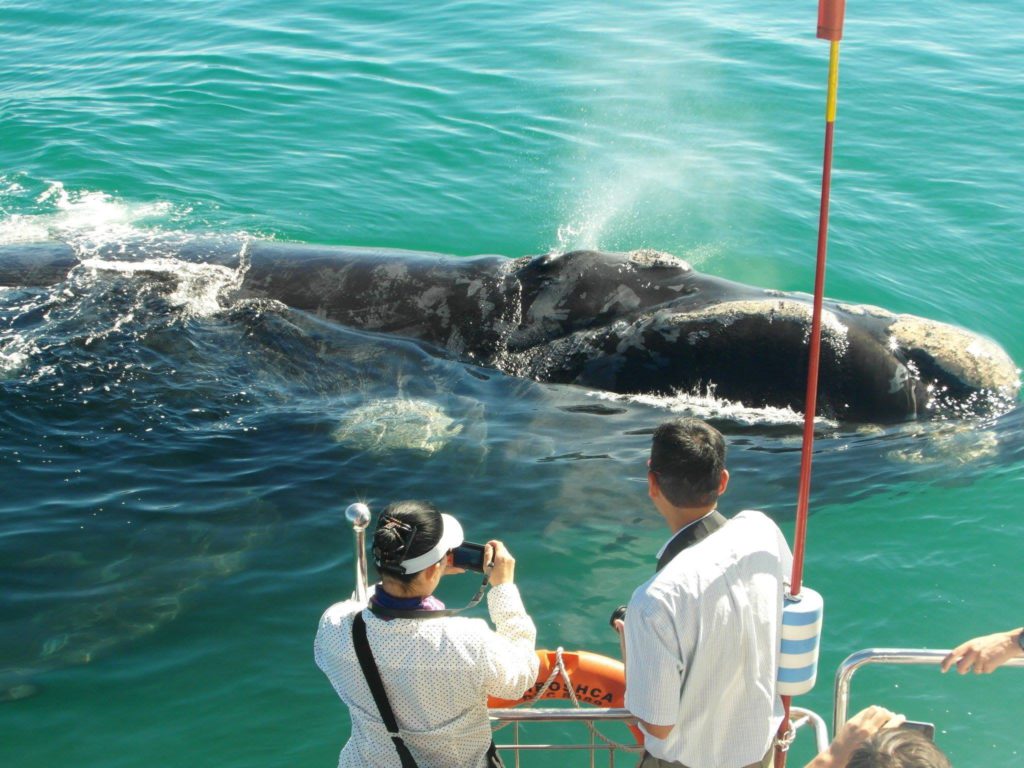 The southern right gets its name from the simple fact it was once regarded it as the “right” whale to hunt – the animals are slow-moving, rich in oil and baleen, float when killed and provide an enormous yield.

This “rightness” brought the animals to the brink of extinction in the early 20th century, as whalers killed an estimated 20 000 of the animals. Protected in South African waters since 1935, their numbers have slowly crept back to a world population of some 4 000, most of which visit the country’s coastline every year.

Weighing in at about 60 tons and estimated to live as long as 100 years, the southern right whale (Eubalaena australis) has became a major tourist attraction up and down the South African coast.

Their breeding ground is the sheltered bays of the Cape coast, with the majestic animals spending up to five months a year here. They pass their time playing, courting, and nursing their newborn calves, often just meters from the shore, providing spectacular land-based viewing.

Southern rights are massive and rotund animals, rounder and heavier than the humpback or Bryde’s whale and smaller only than the blue whale. They can be identified by their total lack of a dorsal fin, stubby square-ended flippers, and by callosities, unusual wart-like growths, on the head.

Mostly a dark bluish-black colour, about 4% of calves are born entirely white. This is a sex-linked genetic trait – all white calves are male – and the colour darkens to the usual black as the animal matures.

The breeding season is during spring, from July to October. Females calve every three years, with a year of gestation, a year raising the calf and a year of rest. The cow needs the rest year to recover from the tremendous physical strain of gestating a four-ton calf in just 12 months, and suckling it for another six months. A calf can drink up to 200 litres of milk and grow by as much as three centimeters every day.

Intelligent, inquisitive and sensitive animals, southern rights form small social groups of about six related animals. In the breeding season cow and calf pairs can often been seen cavorting in the water together. The way mother and child breach alternately, one after the other, suggests that this and other behaviour may be taught.

Southern rights are willing performers for onlookers, often breaching several times in succession to hit the water again with a cannon-blast sound. Another characteristic behaviour, unique to the right whale, is resting head-down in the water for several minutes with the flukes held aloft, as if hoping to be pushed along by the wind – variously called “sailing” or “head-standing”.

Then there’s flipper slapping, lobtailing – slapping the tail on the water – and spyhopping, raising the massive head to see above the surface. Their huge curiosity often prompts them to approach boats to investigate – a trait with tragic consequences in the days of the whalers.

The best time for watching the southern right whale in South African waters is from June to November along the Cape south coast, although some will already be as far north as KwaZulu-Natal. Peak calving season is July and August, but whales can still be seen through until early December.