To the East of Gansbaai lies the tiny village of Baardskeerdersbos, allegedly named after a formidable spider with fear-some looking mandibles.  It is in fact harmless.  There is another legend about the origins of it’s name, dating back to the 1730s which describes how a farmer in desparate need of a shave, bequeathed his farm to a travelling barber in exchange for a neat short back and sides!

Baardskeerdersbos offers very little civilisation except for a  small store selling chips, coffee and such-like, an old double-storey bus used as a holiday home an a couple of cottages.  Despite being a hamlet boasting an historic church, it is also home to the famous Baardskeerdersbos Orkes, widely known for its nostalgic songs, played on instruments such as the banjo, concertina and accordion.  Until the leader of the band died in 2015 the Baardskeerdersbos Band played regularly at local weddings, dances and festivals. 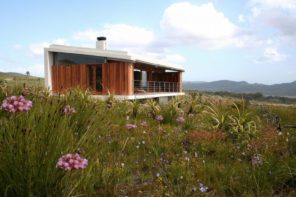